This proposal is to alter section 2. in the 2023 Bao Annual Roadmap.

2. Vested BAO for all previous and present guardians

In the initial distribution phase (yield farming) of the BAO token, 6% of the minted tokens went to a development wallet. 5% is currently unlocked, and 95% is locked like the rest of the DAO member’s locked tokens.

This point will divide the development wallet vested tokens to reward properly the guardians who brought the protocol up to this point. 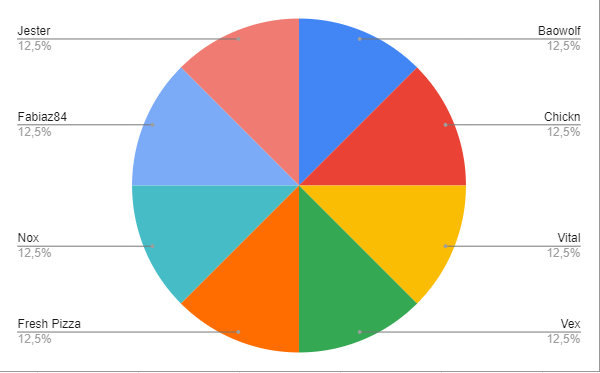 I believe it’s too early to be distributing a large amount (6%) of the entire token supply to 8 guardians that have yet to provide a profitable product at this point. These tokens should be held for the time being until some basic performance measures are met including; the token price recovering to a yet to be determined level and like Baoman the hard synths have reached a mint volume of over 25M.

I would like to hear other criteria set out from other members. I personally think the metric should be BaoV2 being over 1 dollar USD before these guardians receive their vested share in addition to the hard synths being over 25M in volume.

If these metrics can’t be met within 3 years the 6% in the development wallet should be burned.

My problem instantly with this proposal is that it speaks about the BAO token as an investment token and community members as investors.

I do not believe the price of BAO is a good metric, it is not the Guardian’s fault if people have lost any value to their portfolio, as it was anyone’s personal choice to have BAO or to participate in the project despite the numerous warnings of dilution and how alpha the project was at the time.

The development wallet distributed to Guardians working for the community gives a direct incentive for its success by giving them a say in the projects direction. This does not.

Performance metrics also give direct incentive to the project’s direction and results. Giving out rewards before goals and profitable results are there for all participants is unfair.

I think price is a very clear and understandable metric for just about everyone. I’d like to hear other options besides just having a big chunk of tokens handed out beforehand as an incentive.

I’d understand the issue more if it was giving a bonus of treasury assets, but the proposal is to give voting power to the people who have been working on the project for 2 years so that they have more of a say reflective of the time spent in the DAO contributing to it. I think that’s plenty fair, considering no one here is obligated to work on the project.

The tokens aren’t just handed out they are vested for 4 years, and veBAO will be allocated. I don’t see what part of this is unfair. The Guardians have been elected by the community, and for a time they weren’t compensated for their work and were volunteers, I was a volunteer for several months. If more people in the community stepped up they’d have the same opportunity as what is being proposed here.

People involved here gave both time and their assets to support this project. And that should both be compensated for. As it sits now the guardians have voted to give themselves each $320,000 USD worth of Bao at todays prices while those that put assets into this project have taken a 95% loss because of the token price drop. You are setting yourself up for life regardless of whether the token price recovers and don’t really have the same incentive for it to recover because you are still set for life.

If all the investment wallet is distributed now what does that leave for any future guardians? It’s too big of a handout and too early. In addition to this it give more voting power to give the guardians more rewards.

There are a few things off with this statement

No one would be set up for life unless there is no liquidity and the project is abandoned 4 years from now.

We also put assets into this project ourselves, and most farms were not even associated with the BAO price. So no one took a 95% loss on those, and that was their risk management for the BAO LPs, not ours. The project has been straightforward regarding the dilution of supply from the start.

This is a good comment about future guardians; however, we could use slashing fees that will be collected through distribution for them.

So you’re talking about further dilution to pay future guardians when those slashed tokens could be burned to help the token price recover. I’d rather see this payout to the guardians be closer to 2% divided and the remaining 4% kept for future payments to guardians.

Here is a better proposal that i think could fit your concerns, while make it better and well suited as a framework for new guardians.

In the annual roadmap, it has been proposed that the development wallet vested tokens to be divided equally to reward properly the guardians who brought the protocol up to this point.

Originally, this section was written for a few reasons:

Some community members challenged this point for good reasons.

As such, with the BAO held by the dev wallet in distribution phase #1, we estimate a guardian share of 4.75M of BAOV2. The Dev wallet had 6% of that phase emission, and we propose to give ⅙ of those tokens for every 6 months of seniority as a guardian.

Guardians were introduced in the second year of Bao. For those who were contributors before that time, the contribution date will be used instead of the guardian acceptance date.

This table will also be the reference for future guardians to preserve equality and equity among them.

With this calculation in hand, the amount of BAO distributed to guardians would be as followed: