A proposal by fabiaz for using PandaSwap once again as a sandbox for contributors to learn, show initiative, and bring additional protocol value.

We have always stated that the infrastructure is not there for us to deploy on BSC. This was true, we used to have the price feeds on Polygon nests wired to Sushi subgraphs. However, since our implementation of nests on Polygon the Sushi subgraph has been down twice and in the process our protocol continuity. To mitigate this we have wired the price feeds up to CoinGecko, and this opens the opportunity to deploy Panda Ponds on BSC.

A thing we have to keep in mind is that the deployment will not be done by the smart contract galaxy or front-end galaxy. But by other contributors, if you are willing to contribute to this initiative as well you can let us know on our discord in the Panda-related channels. In the end, the smart contract galaxy and front-end will be performing a QA/QC before we put everything LIVE.

By deploying the soft synths with minimal help from the above galaxies we have opportunities for contributors:

This concept consists of multiple topics, during the concept phase we would like to formalize a mini bill or decide to vote on the topics separately. Anything here is a concept so nothing is set in stone.

The items we are trying to reach a consensus on are the following:

The goal is to decide on the proposal and which topics will be included. This means if adopted the proposal seeks to:

Soft synths are deployed on Polygon under our Polly Finance franchise, and we recently deployed them as well on mainnet for Bao.

With this proposal, we seek to find support to deploy soft synths on BSC and agree on the way forward with this franchise. But keep in mind there will be minimal support from other galaxies as they have other responsibilities to focus on.

The implementation will largely be the same as Polygon, gas costs are higher than on Polygon but the oven functionality as we have planned for mainnet is not considered yet. Unless we feel this is needed for BSC as well in the future.

For those unfamiliar with the term the oven, please check the description below:

The “oven” accepts ETH deposits and waits until there is 10ETH deposited before carrying out the mint transactions, allowing everyone that uses it to share the gas costs involved with minting new baskets.

You can find the original proposal to deploy soft synths on polygon here: [BIP - 2] Accelerated Proposal for nDEFI 3

As part of our decentralization process, it could be important for this deployment to have a distinct galaxy that will support the day-to-day operations on BSC. The galaxy will be a temporary one with a low operating budget and a multi-sig.

This new galaxy’s roles and responsibilities would include among other things:

The initial composition of the galaxy will be decided on; however, the following Guardians are open to or will be part of the initiative:

The guardians and contributors from the existing galaxy will be consulted but new contributors can also apply to help with the deployment. As mentioned, the initial operating budget should be 250$ max.

After the delivery, we will evaluate the contributions and the viability if we would keep the galaxy active.

The current versions are mockups, we would like to openly discuss what the community would like to see. For this, we can use BSC TVL - DefiLlama to define the composition.

Following a similar theme to the nDEFI nest on Polly Finance, we will release a similar product on BSC, designed to weigh more towards projects with a high Total Value Locked (TVL) on BSC.

The Total Value Locked (TVL) on BSC is chosen. The criteria for inclusion and weightings are defined as:

Based on the selected criteria, if deployed when data was collected the pond would look like this: see the attachment below the pSTBL description.

The pSTBL basket is designed to provide yield-bearing exposure to a basket of stable coins, helping to negate risk and provide a low-effort means of yield farming the best low-risk yields available.

The criteria for inclusion and weightings are defined as: 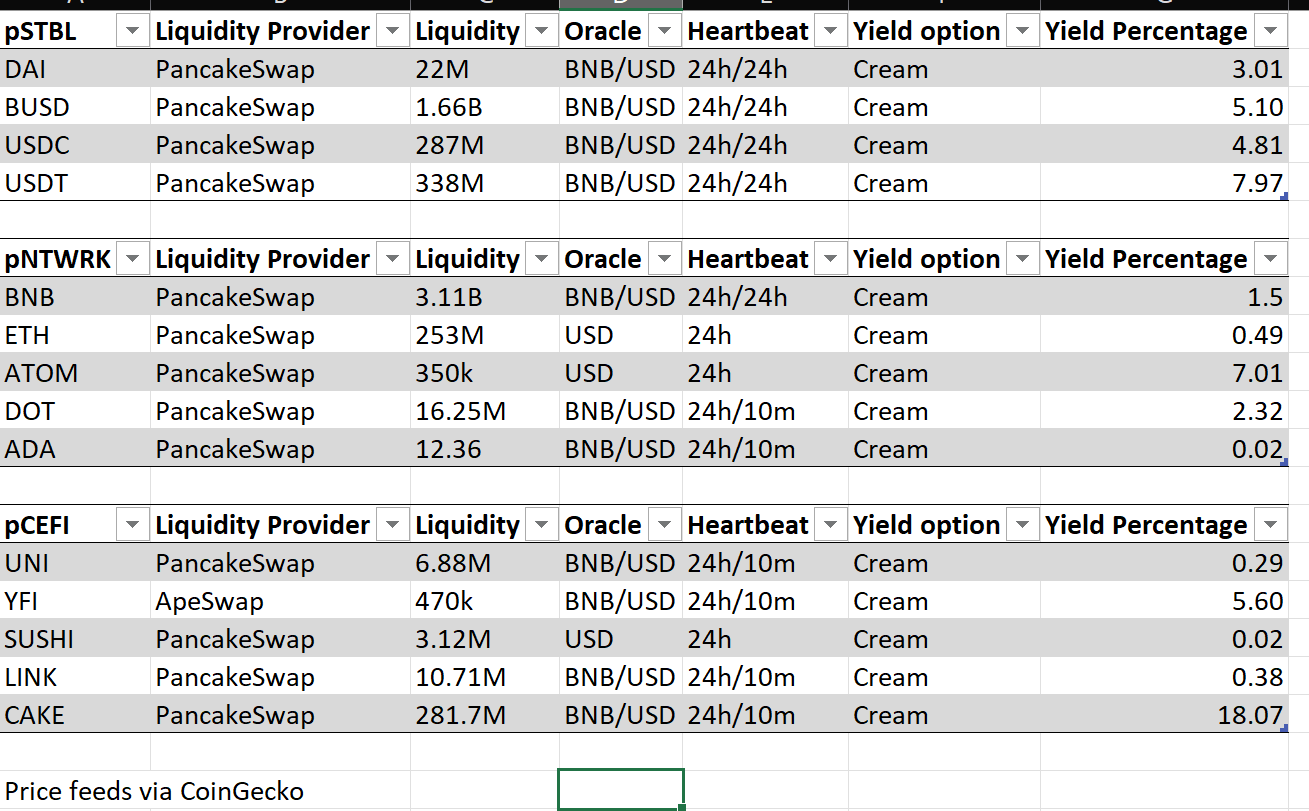 The fees are broken down as follows:

The determination phase takes place during the final 2 weeks of the quarter. During this phase the changes needed for the next reconstitution are determined.

Proposed changes will be published on the governance forum for 1 week then a governance vote will run for the community to approve changes.

In the two weeks following a successful vote, the nest components will be adjusted as per the instructions published during the final 2 weeks of the quarter.

The multi-sig holders are authorized by the community to re-balance nests outside of the usual schedule during moments that they collectively deem to be critical emergencies. This clause will allow for quick re-balancing in the event of a protocol or nests being in danger of failing. An example of when this would be utilized would be if a stable coin begins losing its peg/ becoming insolvent, or a protocol suffers an exploit that is not dealt with sufficiently.

These scenarios may be time-sensitive and require immediate resolution. Thus, the team may decide to act without warning and explain their actions in a governance forum post afterward, or if there is deemed to be time, an emergency governance vote will be posted.

This is intended as a safety mechanism only, to prevent loss of funds for our users and as such would be a power exclusively exercised under extreme circumstances.

Please let us know if there are any other options we should consider, the idea is to explore more strategies on BSC once the MVP has been deployed.

This point will authorize the multi-sig to end the current farms which are still dripping out Panda without cause, instead, we would like to reserve these rewards as future incentives.

To do this we will create a ‘meta pool’ which will reward a test token and set it to a high number of points in the system. That test token will be held by the multi-sig. This will allow the remaining Panda rewards to flow into the multi-sig to be used for future incentives.

This will NOT apply to the certain Panda pools that continue to provide Panda with some basic liquidity. The rewards from these pools will be adjusted to try and maintain roughly their current reward levels within this switch.

Additionally, new Farms will be created for the ponds which we will create.

Currently, the unlock has been postponed for 6 months from its initial unlock date.
With this topic, we would like to align what to do with the unlock.

Personally, I’m for 3 on unlock strategy.

It has been 7 days without any feedback, let’s keep it open a bit longer.

I propose to have the following voting options.

Creating a temporary galaxy and a multi-sig which starts off with the following users:

Creating a temporary galaxy and a multi-sig which starts off with the following users:

Personally, I think we should keep it to either approve vePNDA or for more discussion to be had. It would be the best outcome and should be voted on first before allowing votes to be diluted between multiple choices.

Good suggestion let’s do that.